Each term, we provide 48 starters – enough for 4 per week for 12 weeks – plus 3 sets of 12 ‘Fun-Fair Friday’ tests.
Starters are categorised under key mathematical skills – see headings below. In each download, expect starters further down the list to get slightly harder. Most starters include a couple of quite challenging questions!
Starters with an E at the end of the download filename are easier, as they revisit skills from Reception or from previous Y1 terms. 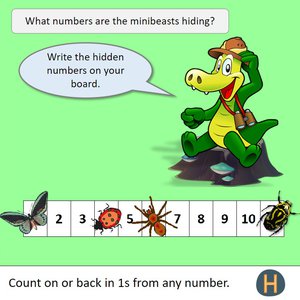 Counting
Confident counting on and back in 1s and 10s.

Children count on or back in ones, being able to say a missing number in a count, or the next number (one more), or the number before (one less) than any number 1-100. They also rehearse counting on and back in tens from any 1- or 2-digit number. It is important that children recognise the pattern in counting in tens, and, specifically, that they understand that the ones digit does not change when saying 10, 20 etc. more or less. 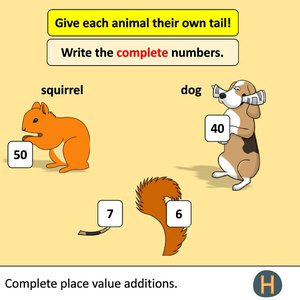 Children partition 2-digit numbers into tens and ones. This involves reading and saying numbers aloud, then writing place value additions to represent recombining the parts – including money amounts in 10ps and 1ps. Children compare two or three numbers and place them in order. They identify missing numbers on a 1-100 number grid, or on sections taken from it. 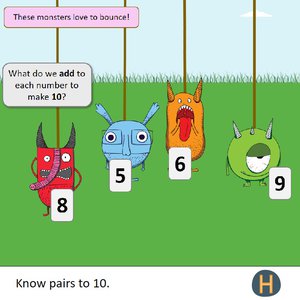 Children rehearse number bonds and pairs of numbers adding to 7, 8, 9 and 10. Some starters focus largely on bonds to 10. They recognise and identify unit patterns, using these to develop fluency in mental addition and subtraction. In Summer, children begin to count on in 10s and 1s to add and count back in 1s or 10s to subtract.
Calculating with amounts of money is introduced in Spring, consolidating learning of place value skills as well as addition and subtraction. 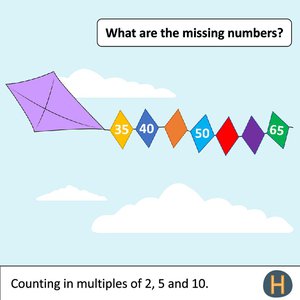 Getting to know multiples
Practise counting in 2s, 5s and 10s

Each starter combines practice of ‘clever counting’ in steps of 2, 5 and 10. In this way, children begin to recognise patterns of multiples, as a precursor for learning tables facts in Year 2. To encourage application of digit patterns, counts may go forward or back and beyond the 12th multiple.
The ‘x’ symbol is introduced in Summer, where children write a multiplication sentence in response to an image of objects placed in sets. 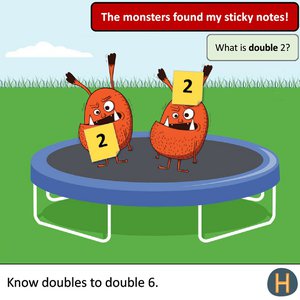 Doubling, halving and fractions
Doubling numbers to double 6, halving even numbers to 12, finding fractions of amounts

Children rehearse known facts, e.g. double 3 is 6 and half of 8 is 4. They need to ensure fluency, recognising doubles of numbers up to 6, and identifying numbers that are therefore easy to halve, such as 12.
Beginning in Spring and consolidating in Summer, children calculate or recall half and quarter of amounts, supported by whole-part images. 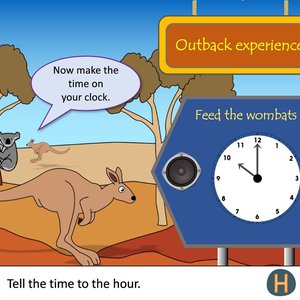 In Autumn, children become familiar with the full range of coins, practising swift and confident identification. In Spring and beyond, use of money is embedded in other skills: Exploring place value; Addition and subtraction.
They rehearse telling and making times to the hour on analogue clocks in Autumn, then by Summer are confidently telling the time to the half hour. 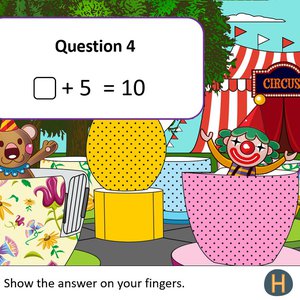